I had no idea what a balance bike was until another blogger I was close to was teaching her son how to ride a bike.  I liked the idea, but at the time we weren’t living in a place where I was able to take the kids on rides.  Now that we’re out in the suburbs, Big Bug got his first bike this year.  He’s done okay, but truthfully he still struggles with keeping his balance.  With Little Bug, I thought that maybe using a balance bike would help him catch up to where his brother is.

So What’s a Balance Bike?

It’s basically a bike without pedals.  The child pushes along the bike with their feet and then lifts them up to get their balance.  Some models even have a little foot rest for the kids to use while they’re practicing.

Chillafish has a couple different versions

The Bunzi gradual balance bike from Chillafish is a unique 2-in-1 balance bike for toddlers. To teach balance, start in 3-wheel mode and switch to 2-wheel mode when your child is ready (no tools required!). With a storage trunk in the seat for toddler toys and snacks, the Bunzi is lightweight and perfect for indoor and outdoor riding. Made for ages 1-3 years old, Bunzi comes in 4 colors: blue, red, lime and pink.

The BMXie balance bike from Chillafish is the perfect first bike for preschoolers. With a BMX-styled bicycle frame and oversized tubing, kids can ride in style as they master their balance and coordination skills without having to worry about pedals. The bike features an adjustable seat and removable footrest (no tools required!). Made for ages 2-5 years old, BMXie comes in 5 colors: red, blue, lime, pink and yellow. 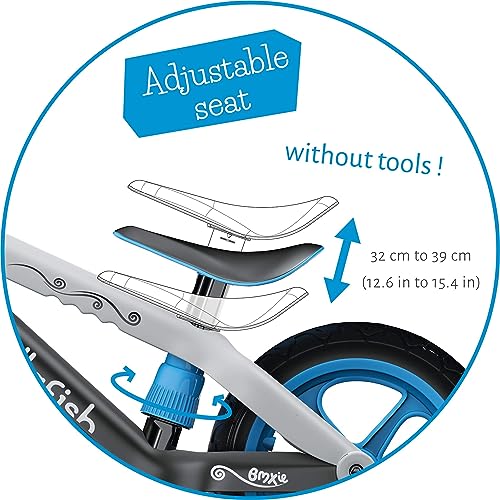 Chillafish was nice enough to send us a BMXie to try.  It’s a balance bike, but it looks a lot like a “big kid” bike.  Little Bug was able to help me assemble the BMXie.  All it takes is a little allen wrench that comes with the bike.  There are instructions in the back of the booklet that are just pictures, so they’re not that hard to follow.  The only thing that took a bit was adjusting the seat height.  You have to turn the dial under the seat to loosen it, pull up, then re-tighten the dial.  It also came with different stickers for the number plate at the front so that Little Bug could customize it to be something he loves. 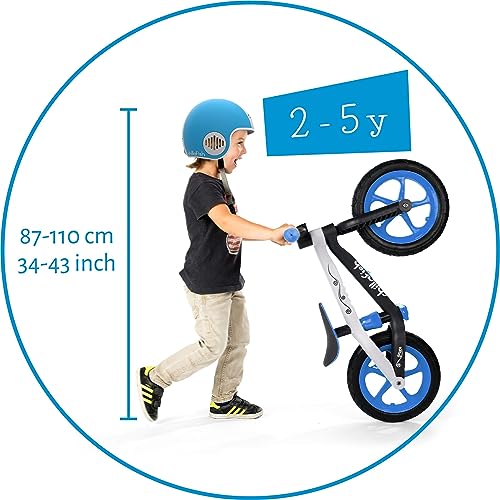 Unfortunately, the balance bike isn’t something we’re going to be able to use very long. Little Bug was excited to take it outside before the snow hit.  We ran into a small snag though:

While the BMXie is rated for 2-5 year olds, a tall five year old doesn’t seem to be able to use it.  We tried adjusting the seat up and down to see if we could find a setting that made it better and the tallest setting seemed to help a little.  He was a little uncomfortable, but still rode it anyway a few times since we opened it.  I think that with a little more time, he could definitely make an easy transition to a regular bike and not have the same struggles that our oldest son did.  (The oldest is always the test child, right?)

My name is Rebecca. I am a freelance ecologist who loves the countryside and enjoys sharing a tale or two about it.

This website is a participant in the Amazon Services LLC Associates Program, an affiliate advertising program designed to provide a means for sites to earn advertising fees by advertising and linking to amazon.com.